Mike Novogratz: ‘If You Think of Bitcoin as a Finished Product, It Works’ 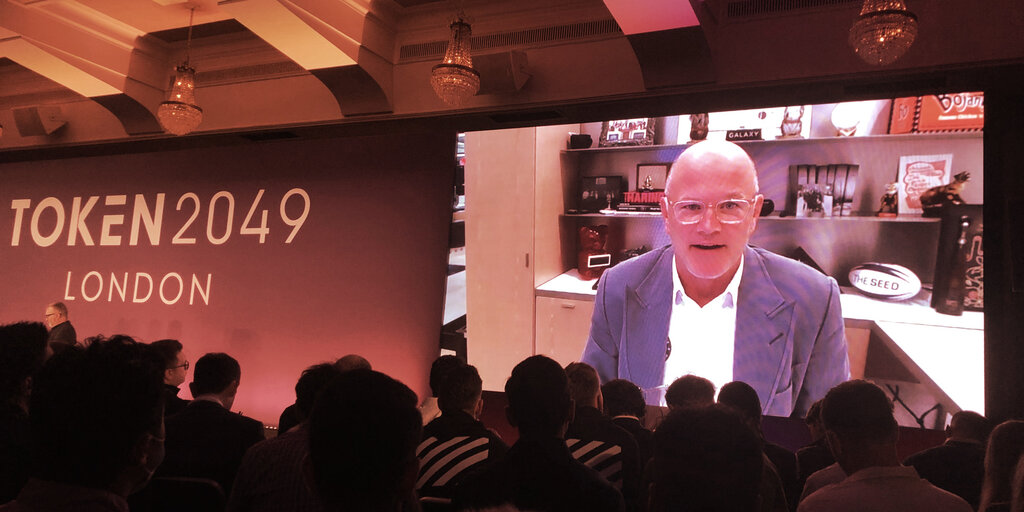 Mike Novogratz, the veteran investor behind crypto-centric firm Galaxy Digital, shared insights on Bitcoin, Ethereum, the NFT landscape, and regulation during a fireside chat at Token 2049 in London today.

When asked about the future prospects for Bitcoin and Ethereum, Novogratz said that there’s no comparison between the two.

“Bitcoin is going to be mostly used as a store of value,” he said, “like liquid gold,” whereas Ethereum has more potential uses cases as a technology. There is a “chance that [Bitcoin] will be used in payments,” but payments are “not helpful” for the Bitcoin system, said Novogratz. “If you think of Bitcoin as a finished product, it works.”

Novogratz has long been an extremely vocal Bitcoin bull. His latest effort is a partnership with Invesco to apply for Bitcoin ETF (exchange-traded fund) approval from the SEC. But he is also invested in Ethereum, and Galaxy Digital’s latest product, a decentralized finance (DeFi) Index fund, pushes him further into the space.

Still, Novogratz warned onstage at TOKEN2049 that the crypto space is headed for a “period of a lot of regulatory uncertainty.”

The SEC has flexed its muscle of late, pushing leading U.S. exchange Coinbase to drop its Lend product before it could launch (according to Coinbase), and facing off against Ripple in a $1.3 billion lawsuit over XRP token sales. Meanwhile, major U.S. financial regulators are meeting behind closed doors to decide how to deal with stablecoins.

Novogratz’s take is that stablecoins “should run on public blockchains” as opposed to a state-run platform like the one China is developing. He added that central banks should set clear guidelines on their development within private industry and that this and other issues would be debated in the U.S. within the next three-to-six months.

Newly appointed SEC Chair Gary Gensler has argued that the SEC is the entity best placed to regulate the nascent $2 trillion crypto industry and the lending protocols that are fueling its growth. But Novogratz expressed concern that innovation, as “the baby,” would get “thrown out with the bathwater,” and once again referred to Gensler as the aspiring “Sheriff of Cryptoville” thanks to his intent to regulate the whole industry.

Regulation is not keeping up with the speed of development on smart-contract platforms such as Ethereum, Solana, and Polkadot, Novogratz said. These platforms will be judged by crypto traders mostly on their speed, and judged by regulators on how secure and decentralized they are. But the regulators, Novogratz says, “are so far behind at this point that I think it will be the market that decides.”