A blockchain is a distributed ledger that records data in a series of linked blocks. The very first block in the series is the genesis block. Each block contains data, a hash and the previous hash and it is almost impossible to modify or manipulate that data.

Depending on the functionalities of the blockchain, the written data in a block varies. As a basis, as with bitcoin, the block always contains the wallet address of the sender and receiver and the number of crypto that has been transferred.

Extensions on the blockchain or next to it (side-chain) can be smart contracts such as with Ethereum, NEM and EOS, P2P messages or ballots. However, it will not remain with the applications mentioned above. Many studies are underway among companies in various sectors to expand or adapt blockchain and to apply it according to their own need and wishes.

A hash is a unique code that is calculated when a new block is generated by changes in the last running block and identifies a block with all the data it holds. Every new block contains a copy of the previous hash of the old block as a reference. This creates a chain of blocks and therefore is called a blockchain. A hash can never create the same block and makes the chance of manipulation small. A hash is also useful to identify changes. 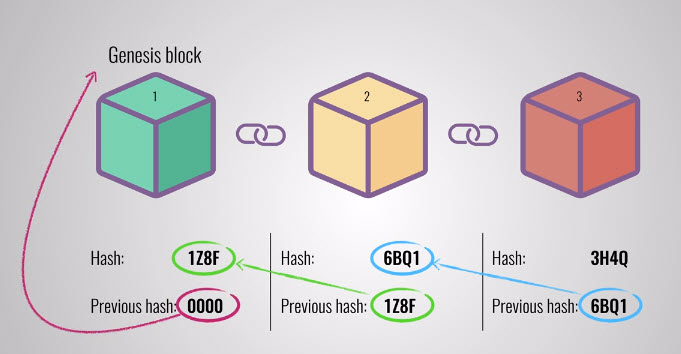