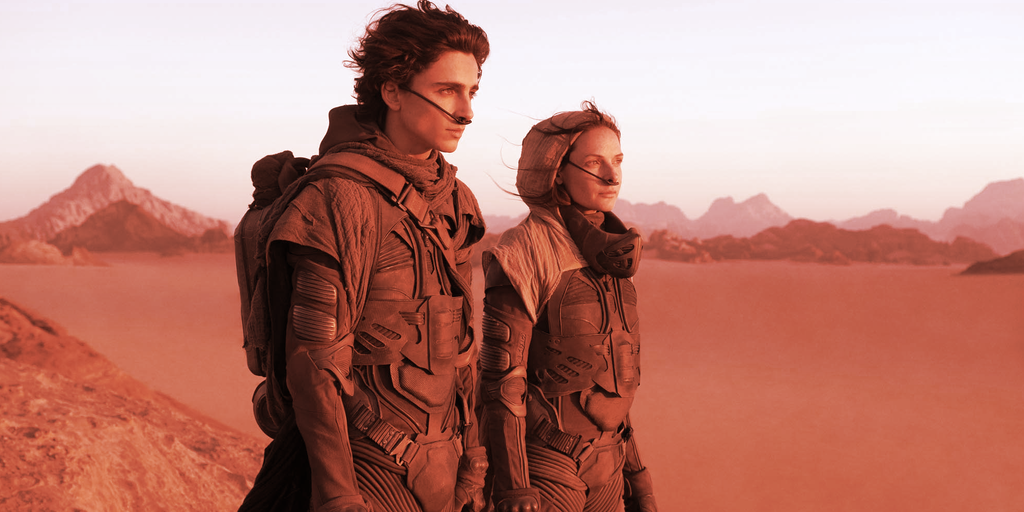 A new “Dune” film based on Frank Herbert’s classic sci-fi novel will be released in October, and the big-budget flick looks to be an epic-scale adaptation of the fan-favorite work. However, today’s announcement of NFT collectibles based on the film haven’t been well received, due in large part to the message of the source material itself.

Legendary Pictures will release the Dune: Future Artifacts collection later this month on MakersPlace, which sells NFTs minted on the Ethereum blockchain. An NFT acts like a receipt for a provably scarce digital item, and in this case, Legendary and MakersPlace are selling digital sculptures based on the film’s characters, as well as digital paintings.

However, Legendary hasn’t received a very positive response from “Dune” fans. In fact, the company’s tweet today about the NFT collection has seen widely negative responses, many suggesting that the studio missed the point of the novel itself.

Released in 1965, Herbert’s “Dune” is considered one of the greatest sci-fi novels of all time—and has also been praised as a “climate fiction pioneer” by Salon. Environmentalism is a primary theme of the epic saga, which spans multiple books, as it explores the ecological impact of people and the toll it can take on a living planet.

Amidst this year’s NFT market explosion, which generated $2.5 billion worth of transaction volume in the first half of 2021, Ethereum’s environmental impact has received wider scrutiny. Ethereum currently runs on a proof-of-work consensus model based on a resource-intensive “mining” approach, in which powerful computers on the network compete to be the first to validate transactions and earn cryptocurrency rewards.

Digiconomist estimates that the distributed network that powers Ethereum uses about as much energy each year as the country of the Czech Republic. However, crypto industry advocates have questioned the methodology of such estimates, or claim that crypto mining incentivizes the use of renewable energy, as Twitter CEO Jack Dorsey has said of Bitcoin.

Many NFT projects that launched in recent months have billed themselves as “eco-friendly,” due to using alternative blockchain networks that don’t have the same kind of environmental footprint as Ethereum.

Other platforms and projects have paid for carbon offsets, like Nifty Gateway. Legendary Pictures—which also launched NFTs around this spring’s Godzilla vs. Kong film release—will purchase offsets for the Dune NFT project. “We want to assure everyone that the Dune: Future Artifacts Collection will be offset using Aerial, a sustainability platform that calculates the carbon emissions based on associated energy use,” the company tweeted.

Ethereum is set to undergo a network transformation dubbed Ethereum 2.0, which will see the blockchain platform shift to a more energy-efficient proof-of-stake model. With that approach, Ethereum will no longer need super-powerful computers to perform arbitrary work to verify transactions, and The Ethereum Foundation estimates that the new network will consume 99.95% less energy as a result.