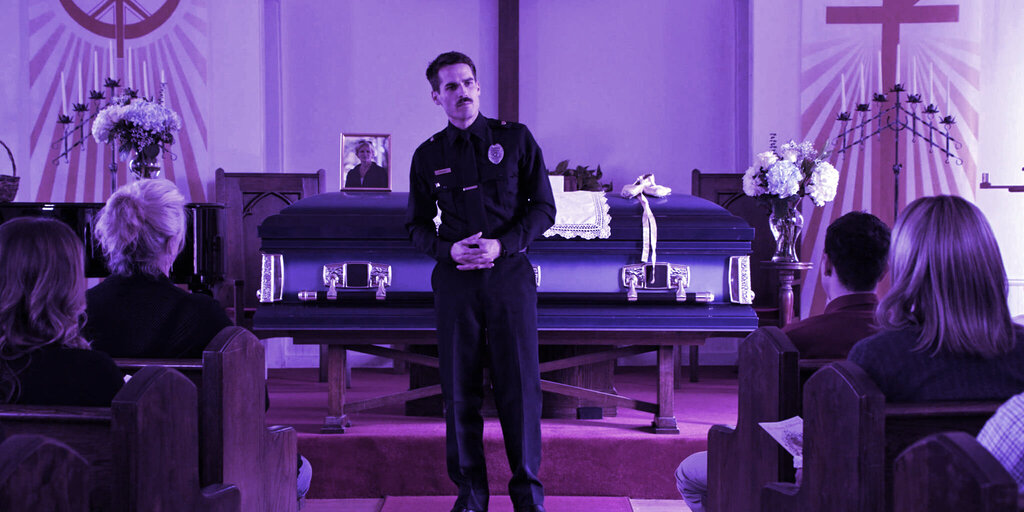 Film director Jim Cummings is quite the multitasker, having written, directed, edited, and starred in his first feature, Thunder Road. Now, he’s adding “NFT creator” to that list.

He’s auctioning off his personal copy of the script for Thunder Road as a non-fungible token (NFT) on OpenSea, complete with smudges, coffee stains, and scribbled notes.

“I just thought, I haven’t seen anybody really do this inside of the feature film space yet,” he told Decrypt. “I have this thing sitting in my apartment that is incredible; looking through it, it has all of these handwritten notes of like, my stupid half ideas that ended up in the movie. I was like, ‘Oh, this can be a cool thing. I see this kind of shit at Sotheby’s all the time. Why don’t I try and share it at an auction, and then have it help to finance some of our movies, or some of my friends’ movies?'”

FilmNFTs is hosting the auction of my annotated Thunder Road shooting script. The goal is to help finance new films and the owner will received a bound physical copy as well as this exclusive digital #nft on a Hello Kitty thumb drive.

He’s also taking a leaf out of Damien Hirst’s book; the purchaser of the NFT will have the option of destroying the physical script, should they choose to. “I was like, ‘Well, if somebody is actually adamant about having exclusivity on the original copy, I’d be happy to just shred it, or burn it,'” he said, likening the process to Banksy’s self-destructing artwork.

“I think that’s kind of how it should be, we should be looking at these things not necessarily as permanent, but as exclusive.”

As someone who’s well-versed in the hustle of financing films—and someone who’s been investing in cryptocurrencies for “the last year and half”—Cummings is intrigued by the possibilities that crypto brings to film funding.

Thunder Road was partly funded on Kickstarter, while some of the funds for his latest film, The Beta Test, were raised through a crowd equity campaign—similar to crowdfunding, except that contributors get a cut of the profits, rather than a DVD and a T-shirt.

Crypto, he suggests, could help to streamline that process. “Having had that success, I can only imagine greenlighting a movie or getting the investor pool from cryptocurrencies or blockchain into a film and then making it immediately. That kind of investment is such a no-brainer, and so much less complicated than the rigmarole of spending three years trying to get financing in the more classical, conventional way.”

Film-makers are already experimenting with crypto funding, he added. “I know people that are doing it; like, I know Macon Blair’s new movie is a film that got financed through Bitcoin. He went out of his way to make sure that’s how it was financed.”

The Swissploitation Movie Using Blockchain To Turn Fans Into Investors

Cummings is, however, somewhat skeptical about the use of blockchain and NFTs for film distribution. While he’s excited about the possibility of automatic residuals from sales of NFTs, ultimately he argued that the “blockchain rights” to a film are “just a different licensing aspect—blockchain being its own form in the same way that theatrical versus streaming is.”

He added that he’s “certain that the powers that be are going to try and fuck over independent filmmakers and independent creators and, you know, put that into the boilerplate contracts, so they own everything.”

More intriguing is the idea of creating a decentralized autonomous organization (DAO) to produce films, something Cummings describes as “obviously the future.”

DAOs have already been used to create everything from fashion brands to perfume houses; so why not use one to make a decentralized film studio? “It’s basically a hedge fund that you could run, and then have it be a group decision-making faculty. I don’t think that there’s anything strange about that; it’s basically what a studio does already.”

Plus, he added, a DAO’s structure is similar to the collaborative process that filmmakers are already used to. “When we’re making movies, we’re shipping it off to the hive mind that are the talented filmmakers in our circle and saying, ‘Am I insane?’ You know, David Gordon Green or Trey Shults are, like, ‘Who can I send this to? Who’s actually gonna vet this thing and say, this part sucks, make it better?’ I think really, that’s a very normal progression for doing anything these days.”

Oscar Winner Anthony Hopkins’ Next Film Will Be an NFT

In the short term, Cummings has a whole collection of material from his past films that could be tokenized as NFTs for a new generation of digital film memorabilia collectors.

“We have bloopers, and we have stuff that I would never release out into the public that I’d be terrified to have out there from all of our movies—like scenes that we didn’t put in. I think that there is like a clean future for that, of partnering with people who are film collectors, or who would benefit from it.” He’s hoping to find collectors who are “interested in preserving the thing, but then also getting benefit from it—learning from what it can tell them.”