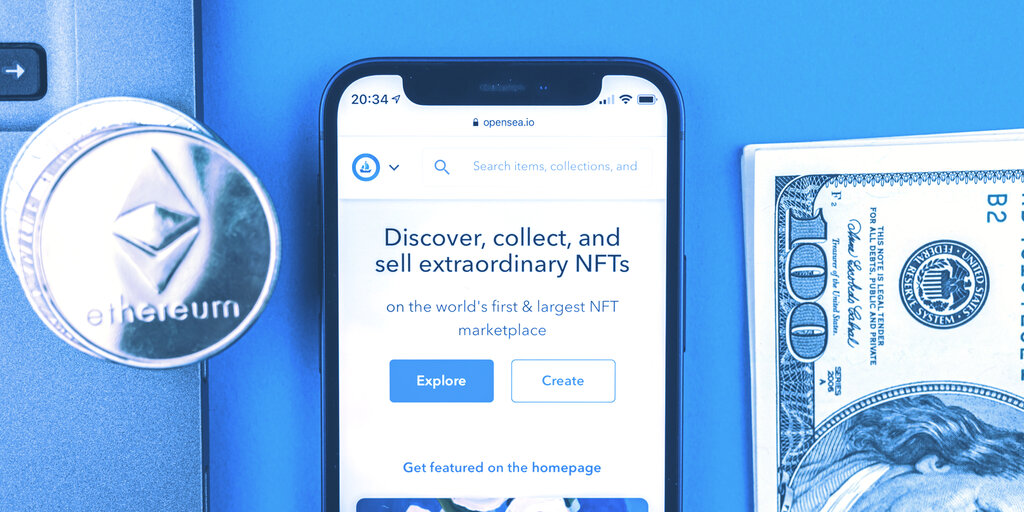 Leading NFT marketplace OpenSea has exploded in popularity this month. Last night, the site surpassed the mark of $3 billion of transaction volume on Ethereum within August alone, per Dune Analytics, and yesterday set a new daily record of nearly $323 million.

How does OpenSea’s massive month compare to the recent performance of top online marketplaces for physical goods, however? Because it runs on Ethereum, a public blockchain, OpenSea’s data is constantly updated and publicly available: we can see the volume stacking up in real time. We don’t have that luxury with traditional, publicly-traded companies, but we can look at their latest respective earnings reports for a glimpse of recent trends.

For example, Etsy—the marketplace popular with crafters and DIY artisans—reported a total of $3.04 billion of gross sales value for the second quarter of 2021, which averages out to just over $1 billion of volume per month during that span. OpenSea’s own total Q2 2021 trading volume landed much lower at just over $381 million, but the NFT marketplace’s August trading volume alone has already beaten all of Etsy’s Q2 sales value.

Online marketplace eBay provides a starker contrast in terms of total volume: the site recorded $22.1 billion in gross merchandise volume over the course of Q2 2021. That averages out to nearly $7.37 billion worth of volume for each month during the span. That’s well above what OpenSea has recorded thus far in August, but eBay has been around for 26 years. OpenSea was founded less than four years ago.

Of course, all these figures pale to those of Amazon, the world’s largest retailer outside of China. Amazon recently surpassed Walmart to take that title, and the firm reported $113 billion of net sales in Q2 2021. According to its latest earnings report, that broke down into $58 billion worth of net product sales and $55 billion worth of net service sales across the entire second quarter.

Amazon’s business is much more diversified than others on this list, and includes such things as its digital subscriptions, online infrastructure services, and array of hardware devices (tablets, smart speakers, etc.). The company also operates physical storefronts in addition to its primary online marketplace. But given that OpenSea has a reputation of being the “Amazon of NFTs,” it’s still worth comparing the numbers that we do have.

OpenSea is currently leading the way on the NFT collectibles front, and no other marketplace comes close. Ethereum-based game Axie Infinity handles its NFT transactions on its own marketplace on the Ronin sidechain, with $820 million worth of volume so far in August, according to CryptoSlam. Meanwhile, CryptoPunks sales are done through developer Larva Labs’ website, and have posted $667 million of volume in August. Both Axie Infinity and CryptoPunks recently surpassed the mark of $1 billion worth of all-time trading volume.

Other artwork-centric marketplaces are well behind OpenSea’s total. Data from Dune Analytics shows $24.2 million in trading volume in August at SuperRare, $20.6 million in volume at Rarible, and $16.3 million at Foundation. All of those marketplaces have seen notable volume increases for August so far compared to all of July, but none are nearly as significant as the nearly 10x leap that OpenSea has already logged as of this writing.

And for those who see buying and investing in NFTs as akin to gambling, here’s one last stat: popular sports betting site DraftKings reported total Q2 2021 revenue of $298 million. OpenSea already beat that mark with its own Q2 numbers, and now its August volume to date is a significant multiple on top of that.