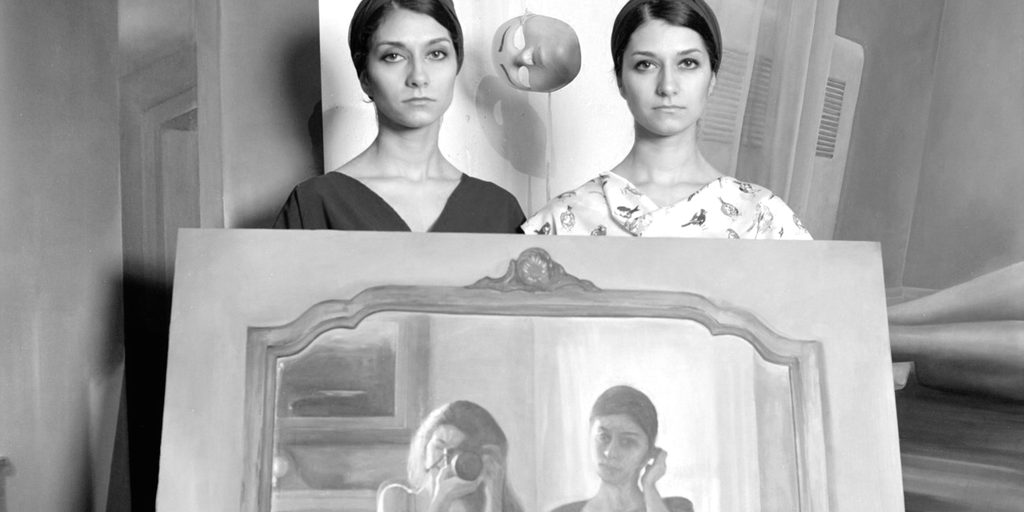 NFTs have brought blockchain-backed proof of scarcity to artwork, social media avatars, video files, and more, creating value for digital items that have traditionally been freely shared and downloaded. Now photography NFTs are on the rise too, and there’s no bigger—or arguably, more powerful—project in the space than Justin Aversano’s Twin Flames.

Today, Twin Flames will get a major showcase in the traditional art world when one of the 100 coveted NFTs is auctioned off live by Christie’s in New York in an exhibition called “Photographs.” The piece, Twin Flames #83 “Bahareh & Farzaneh,” will be the lone NFT featured alongside physical pieces by storied photographers like Ansel Adams, Diane Arbus, and Hiroshi Sugimoto, among others.

Conceived as a tribute to Aversano’s twin brother, who passed away in utero, Twin Flames is a collection spanning 100 photos, each of a different set of twins. Taken around the world between 2017 and 2018, the photos showcase a wide array of subjects in the location and apparel of their respective choosing, all united by the shared attribute of being twins.

Minted as Ethereum-based NFTs in February, Twin Flames are now coveted by collectors. Snoop Dogg and Gary Vaynerchuk both own Twin Flames NFTs, and the portrait collection has yielded nearly $13 million worth of trading volume to date, per OpenSea. One NFT in the collection was sold in August for 506 ETH, or nearly $1.9 million at the time.

The buyer of the Twin Flames NFT will also get 100 physical prints of the full Twin Flames set, and Christie’s estimates a $100,000 to $150,000 sale price for the combined lot. But given Twin Flames’ own recent sales history on NFT marketplaces—including a 110 ETH ($378,800) sale on Monday—and how other recently auctioned NFTs have outperformed estimates, there may be potential for a much higher finish. (Snoop Dogg believes it could smash the record for any single photo ever sold at auction.)

Last month, Decrypt spoke with Aversano about the genesis of Twin Flames, the incredible demand, and his future moves in NFT photography.

With Twin Flames, Aversano said he wanted to create something that “tells a larger story when you’re faced with all of the images together.” He traveled the world, beginning in Manhattan’s Central Park and finishing in Birmingham, England, snapping shots of twins he met. He also met his partner, NFT artist Nicole Buffett (granddaughter of Berkshire Hathaway CEO Warren Buffett, who is not a big crypto fan), while photographing her for the series.

The entire Twin Flames project “is in honor of my fraternal twin’s life,” Aversano said. “I wanted to honor that spirit with this project and also create closure around the trauma and loss that was created.”

Aversano caught wind of the rising NFT market earlier this year, gaining help from collector Gmoney as well as Alex Masmej, social token pioneer and CEO of NFT social network Showtime. With their help, Aversano launched Twin Flames at 0.55 ETH (about $1,000 at the time) per photo, quickly raising around $100,000 to pay off the immense credit card debt he generated during the Twin Flames’ creation and earlier exhibitions. (Gmoney tweeted on Wednesday morning that he had the chance to buy the entire Twin Flames collection for $100,000.)

Twin Flames is considered the definitive "OG" of NFT photography.

Created by @justinaversano, it is a moving collection of photos of twins, doing what they love. pic.twitter.com/Nk9WNRsRha

In the months since, Twin Flames has taken off. With just 100 editions in the set, it has increasingly proven to be a “blue chip” NFT for serious collectors. The cheapest available Twin Flames NFT is listed at 140 ETH ($484,000) on the OpenSea marketplace, with the average sale price over the last 30 days at 110 ETH ($375,000).

Vaynerchuk, the entrepreneur and NFT collector, owns two Twin Flames and tweeted that he’s “excited about” them. Snoop Dogg revealed himself as a Twin Flames holder when he owned up to being Cozomo de’ Medici, an NFT enthusiast on Twitter with a collection now estimated to be worth north of $20 million.

On Tuesday night, Snoop (on his Cozomo de’ Medici account) tweeted a lengthy thread about the Christie’s auction, calling Twin Flames the “definitive ‘OG’ of NFT photography” and suggesting that the auction “could bring the entire traditional art world to its knees.” Snoop cited Andreas Gursky’s “Rhein II,” the most expensive photo ever auctioned at $4.3 million by Christie’s in 2011, and suggested that the Twin Flames NFT could top it.

Sotheby’s featured a single Twin Flames NFT in its June “Natively Digital” online auction, prompted by “overwhelming support from the crypto art & NFT community,” the auction house tweeted. It sold for $35,280, a fraction of the recent going rate for any Twin Flames piece.

This time around, Aversano said that Christie’s offered him the option of an online solo auction, but he chose instead to “be part of something greater in the scheme of time” alongside an array of noted photographers at today’s live auction.

Twin Flames aside, the NFT photography space hasn’t yet seen the same kind of boom as generative artwork or profile pictures. However, there are signs of rising momentum amidst a recent market resurgence that saw $10.67 billion worth of total trading volume across Q3 2021.

Lately, photographers such as Cath Simard, Isaac “Drift” Wright, and Dave Krugman have seen significant sales of their NFT creations, with Wright’s “Where My Vans Go” collection yielding some $2.7 million worth of ETH in trading volume to date.

Thank you to every person who has supported and collector that has collected. That 1000ETH milestone is right around the corner and the auctions are still going. Don’t miss your chance to bid

Simard recently sold a photo of Hawaii for about $303,000 worth of ETH to Gmoney, who tweeted that he bought it because the open commercial rights to the image excited him. Noted NFT collector Punk6259 then tweeted an open offer to buy NFT photos for at least 1 ETH, provided that the creators of each similarly opened up licensing rights after the sale. Punk6529 operates a metaverse gallery dedicated to photography NFTs—with a Twin Flames piece front and center.

Aversano has used his art and action for philanthropy and artist advocacy in the past. Since 2015, his SaveArtSpace non-profit has displayed art and photography across the United States, replacing billboard advertisements with artwork—often with a social justice message. SaveArtSpace, which will receive 48% of the post-tax proceeds from the Christie’s auction, has also displayed CryptoPunks NFTs on billboards.

Now Aversano wants to use his rising position in the NFT scene to advocate for fellow photographers. On October 1, he announced the launch of Quantum Art, an NFT platform that will curate and launch collections from various photographers.

“It’s been very organic growth,” Aversano said of the growing NFT photography space. “I’m seeing a lot more success and then people celebrating, which is great and healthy for the space.”

I am grateful. Today I had the privilege to photograph my heroes @tyler & @cameron with @DCCockFoster & @gcockfoster for a dual completion of my two projects “Smoke and Mirrors” and “Twin Flames” in the same moment. Creating art through the lens of photography at @ChristiesInc pic.twitter.com/POOibeXIqj

Quantum Art has raised $1 million in funding, per Christie’s, and has lured investors including Delphi Digital, FlamingoDAO, Wave Financial, and Punk6529. Aversano likens Quantum Art to leading generative artwork NFT project Art Blocks, which has yielded nearly $1 billion in trading volume to date. He hopes to encourage a “secondary liquid market for photography” in a way that Art Blocks has done for generative creations.

Aversano’s next NFT collection, which he calls “Project 0,” will drop in February 2022 through Quantum Art. Launching Quantum Art, which will announce its first collaborators in the coming days, caps off a wild year for Aversano. His goal now is to continue to spread the word of how NFTs can help reward photographers for their work.

“We really want to create a whole place where people who take photos can actually be appreciated,” he said, “because we weren’t before, with the disposable social media culture.”