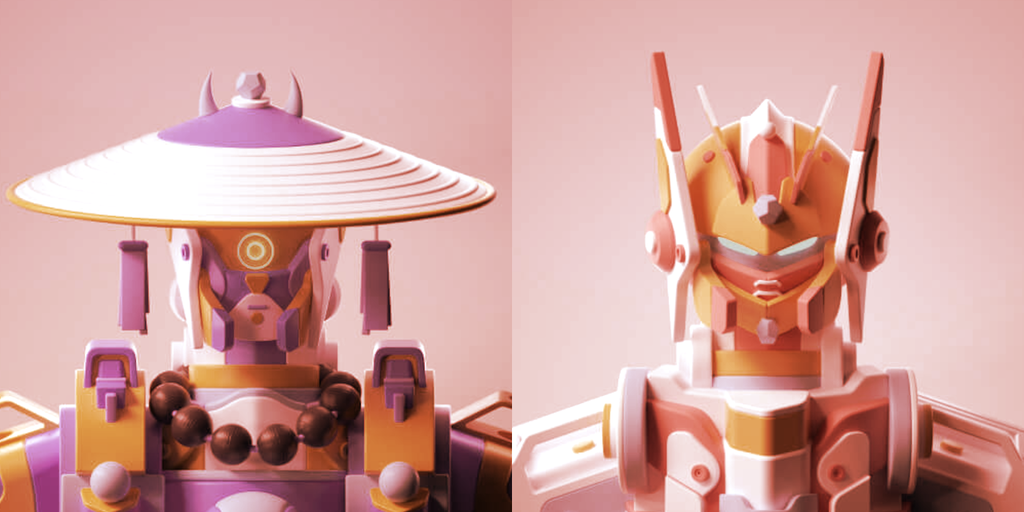 Another day, another buzzy NFT drop—and MekaVerse is one of the largest launches to date.

Since launching yesterday, the Ethereum NFTs have already yielded $60 million worth of sales between the initial mint and secondary sales. Even on the latter front, buyers are spending tens of thousands of dollars’ worth of ETH on something they can’t even view just yet.

MekaVerse is a series of 8,888 NFT profile pictures inspired by Japanese mecha anime series, particularly the classic “Mobile Suit Gundam,” and each 3D-rendered image is randomly generated from a pool of traits. No two images are alike, following the playbook of popular NFT avatar series like CryptoPunks and Bored Ape Yacht Club.

What’s interesting is that even secondary market buyers can’t see what they’re getting just yet with MekaVerse NFTs. Every image on OpenSea right now is an animated placeholder ahead of a collection-wide reveal planned for October 10-11. As such, there is currently no way to tell whether users will pull an NFT with rare attributes or something more common.

The NFT itself is a blockchain-backed deed of ownership for a digital item, proving that your one-of-a-kind avatar truly belongs to you. Other types of NFTs include digital artwork, video files, and interactive video game items, and the wider market has exploded in 2021, including $10.67 billion worth of trading volume in Q3 alone, per DappRadar.

MekaVerse—led by French crypto artists Matt Braccini and Mattey—faced immense demand for its minting process on Thursday. Rather than hold an open mint, which has typically driven up the network-wide Ethereum gas fees (i.e. transaction fees) for other hot NFT projects, MekaVerse held a raffle to secure spots for the closed mint.

The project reported having the holders of 172,876 unique wallets register for the raffle. Ultimately, 8,593 NFTs were sold during the minting window at a fee of 0.2 ETH ($725) each, yielding over 1,718 ETH—almost $6.3 million. The remaining NFTs that were not minted will be used for future giveaways and promotions, the team wrote in its Discord server on Friday.

Since the mint, secondary sales of the MekaVerse NFTs have caught fire, with the OpenSea marketplace showing 14,832 ETH—over $53.7 million—in trading volume in less than 24 hours. The floor price of a MekaVerse NFT (or cheapest available) is currently around 5.6 ETH, or $20,275—an enormous increase from the original mint cost.

Avatar collections have been one of the biggest trends of this year’s NFT explosion. The influential CryptoPunks launched in 2017 and command the largest sale prices of any collection, with a current starting price around $413,000 worth of ETH. Bored Ape Yacht Club is the most popular new collection from 2021, and other top projects include Cool Cats and 0N1 Force.

The MekaVerse launch wasn’t without drama, however. Some users bristled at the need to log into the raffle system using either a Twitter or Discord account, for example, alleging a data harvesting scheme. Others have alleged that the project is one big scam or “rug pull,” citing claimed red flags like an unverified Ethereum contract, a large transfer of funds from the contract, and a lack of communication from the team.

A while back I did these illustrations for @MekaVerse. It was my understanding that I would compensated with some ETH and 1 Meka. It was already tough enough having to pester them for my payment, but they have since completely ghosted me when I asked how was I to obtain my Meka. pic.twitter.com/Lp6uMZEzbO

Today, the team announced that the contract has been verified (as seen on Etherscan), and that it transferred funds out of the contract into a private wallet for “maximum security.” The team further claimed that it had minimized social media interactions around the launch period “for the sake of our mental health.”

Meanwhile, concept artist Emerson Trung—who has worked on the “Doom” and “Transformers” franchises—alleged that the project refused to fully compensate him for his work. However, following Twitter exchanges, including purportedly deleted tweets in which Braccini called Trung’s behavior “disgusting,” Trung tweeted that the team will honor its original agreement, which included one MekaVerse NFT.