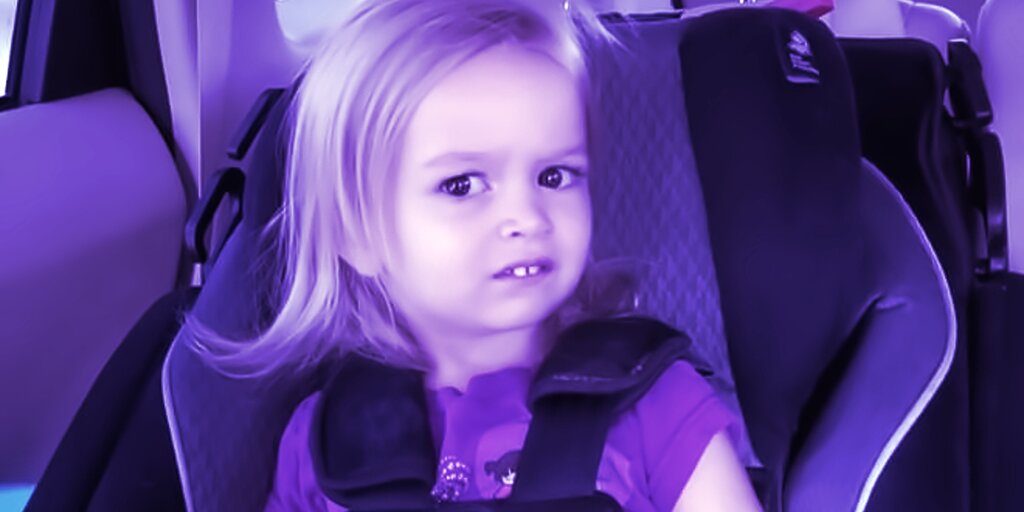 3F Music has snapped up another meme NFT. The latest meme to make its way to the wallet of the Dubai music production company is Side-Eyeing Chloe, which 3F bought on Friday for 25 ETH, or $75,315.

. Thanks so much for all the bids! And thank you to the NFT community for@helping us push this out to the market

Side-Eyeing Chloe refers to a 2013 clip of two-year-old Chloe Chlem responding to news of a surprise trip to Disneyland. Chloe’s mother, Katie, films the reaction of her two children.

While Chloe’s sister, Lily, is ecstatic about the news of her three-day trip—”YAYYYYYY”—and bursts into tears when she learns of her good fortune, Chloe looks less than impressed.

The clip has about 20 million views and the screengrab of Chloe has been reproduced countless times as a meme. Buzzfeed once claimed it was “The Only Reaction You’ll Need For Anything Ever.”

The family sold the screengrab, a 660×371 image, as an NFT on September 24. Each pixel thus costs 30 cents. Katie, Chloe’s mother, told the BBC, “The money is awesome but it’s just the fact that we get to do this as a family is so much fun.”

Katie said that the family plan to save the ETH instead of converting it all to cash. “In an ever-changing world, it may be worth more next week,” she told the BBC.

3F has bought several meme NFTs. The company bought an NFT linked to the Disaster Girl meme for $390,000, an NFT of Kevin Roose’s New York Times column for $560,000, and the Overly Attached Girlfriend meme for $411,000. The company’s founder, Farzin Fardin Fard, holds 393 NFTs in its collection.

A clip of Lily learning about another trip to Disneyland, filmed two years earlier, has 19.9 million views. Lily, overwhelmed, sobs to the camera. Chloe, just a baby at the time, once again looks nonplussed by the news. A clip of Lily falling off a swing three years later has 8.6 million views.

While grilled by her mother in a 2013 interview, Chloe reveals that her favorite drink is “flavored water,” her favorite animal is “monkeys” and that she is potty-trained. While Chloe became famous for keeping her true feelings close to her chest, she gave one thing away about her trip to Disneyland: she’s wearing a Mickey Mouse t-shirt.