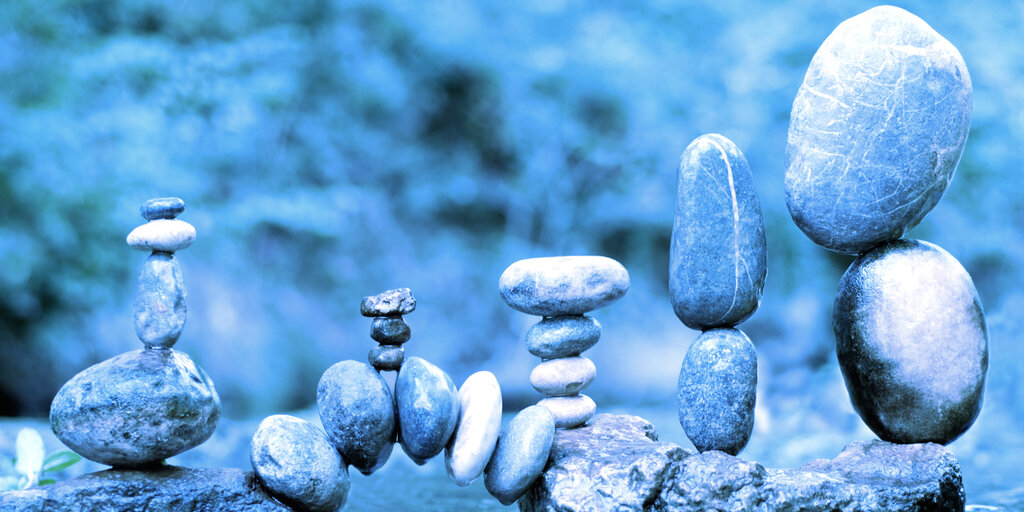 Stablecoin provider UXD Protocol, formerly Soteria, has raised $3 million in a funding round led by Multicoin Capital. The round also included Alameda Research, CMS Holdings, Defiance Capital, and others. UXD Protocol is built on Solana, a blockchain network optimized for high throughput.

“The funds from the raise will be used to hire developers and scale the team,” Kento, the founder of UXD Protocol, told Decrypt.

Unlike traditional stablecoins, which are backed 1:1 with cash or cash equivalents, UXD’s offering is algorithmic. This means that the stablecoin maintains its peg by holding and balancing different cryptocurrencies as collateral. For now, UXD will only accept Bitcoin, Solana, and Ethereum as collateral.

MakerDAO’s DAI stablecoin is another example of an algorithmic stablecoin.

When users want to create DAI, they must supply 150% collateral in Ethereum (or USDC and WBTC, an Ethereum-native token that tracks the price of Bitcoin).

Thus, $150 of Ethereum will earn you $100 in DAI. If, however, the price of Ethereum falls dramatically, users would need to add more collateral to maintain their position. They risk having their position sold to the open market if this isn’t taken care of.

MakerDAO’s mechanism is a relatively straightforward means of keeping DAI pegged to $1. But there have been many other attempts at achieving the same results—many have which have ended in disaster.

FEI dropped down to $0.136. In the process, it should have taught everyone a few lessons about stablecoin design and, perhaps, crypto investing.

Kento, and the latest round of investors, think, however, they’ve found a solution.

“Algorithmic stablecoins have a rocky history. Most algo-stablecoins have failed because they were not backed 100%, which made them extremely volatile and prone to losing their pegs,” Kento said. “UXD, in contrast, is 100% backed by a delta-neutral position.”

“Delta-neutral strategies are not a new idea,” said Kento. “Assuming the positions are managed correctly, they are one of the safest ways to run a yield-generating strategy. In traditional finance, traders create delta-neutral positions to hedge their market exposure and to generate yield.”

Kento came across the idea when using the strategy for traditional trading activity, rather than using it to peg a stablecoin.

More importantly, however, Kento believes that UXD will finally be the first, truly decentralized stablecoin.

With a combined market cap of nearly $100 billion, both Tether and USD Coin are enormous forces in the crypto industry. Despite their popularity, however, the community is often reminded of these two coins’ biggest downside: centralization.

As both stablecoins are operated and maintained by centralized entities, those entities are potential targets for regulators. “It’s a black swan risk that everyone in the ecosystem is pushing to the back of their heads but when it happens it will be devastating for the crypto ecosystem,” said Kento.

Already, Centre, the consortium that oversees USD Coin, has blacklisted $100,000 of USDC after saying that it was complying with law enforcement. Even more recently, Tether froze $33 million involved in the Poly Network hack last month.

DAI is also at risk, as nearly 60% of all collateral in MakerDAO is USDC, according to Dai Stats.

This poses additional problems for the broader decentralized finance (DeFi) space, which pitches itself as a suite of financial services, like lending and borrowing, but without a centralized intermediary, like a bank or broker.

Both USDC and USDT play outsized roles in the various applications on DeFi. This could be in the form of collateral like in MakerDAO or as simply yield-generating assets on platforms like Aave.

“The only reason why USDC and UST have captured so much market share is because every other model fell down on the scalability trilemma in some capacity,” said Kento. “The first decentralized stablecoin to solve that problem and earn the market’s trust will see a tidal wave of adoption.”