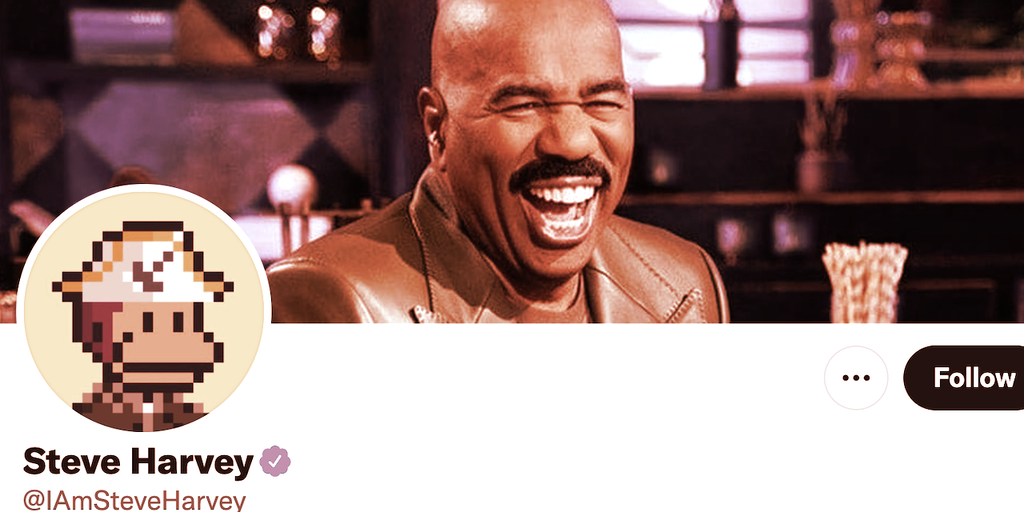 Solana has been one of the hottest cryptocurrencies of late, rapidly rising in value from a price of about $37 one month ago to an all-time high of nearly $197 today, according to CoinGecko. Rising network activity is credited for that swing, and now even comedian and television host Steve Harvey is getting in on the “Solana Summer” NFT hype.

Today, Harvey changed his Twitter profile picture to that of an NFT from the Solana Monkey Business collection, a set of 5,000 randomly-generated images of cartoonish, pixelated monkeys. An NFT serves as a deed of ownership for nearly any kind of digital item, and profile pictures collections like CryptoPunks and the Bored Ape Yacht Club are in immensely high demand of late.

Both CryptoPunks and Bored Apes are based on Ethereum, by far the most active platform for NFT collectibles. In August alone, leading marketplace OpenSea registered more than $3.4 billion worth of NFT trading volume on Ethereum, and the vast majority of top-trading NFT projects live on that blockchain network.

Solana is starting to put up a fight, however. The so-called “Ethereum killer” is a more energy-efficient blockchain network than Ethereum at present, and it’s capable of handling a much larger volume of transactions with fewer fees.

Just a few weeks ago, NFTs on Solana weren’t even a part of the conversation amongst collectors—but they’re finding avid buyers and driving demand on the rising platform.

Solana Monkey Business is one of the latest NFT collections to find an audience on Solana, following recent drops like Degenerate Ape Academy and Aurory. Both of those collections have been credited with boosting activity on the platform, and their respective drops also coincided with a rise in the price of Solana’s SOL coin in recent weeks.

According to data from Solanalysis, NFT collectibles on Solana have generated some $94 million worth of trading volume over the last week. Solana Monkey Business has a seven-day volume mark of $6.2 million as of this writing, placing it third on the list behind the aforementioned projects. Rapper and YouTube personality KSI also changed the avatar on his crypto-centric Twitter account to that of a Solana Monkey Business NFT today, as well.

Harvey did not tweet about the decision to change his profile picture to a Solana Monkey Business NFT. Decrypt has reached out to a representative for the comedian and will update this story if we hear back.

This isn’t Harvey’s first dalliance with NFTs or the crypto world. Back in May, Harvey partnered with NFT marketplace Rarible to sell his own NFTs to benefit charity—his own nonprofit Steve and Marjorie Harvey Foundation.

At the time, Harvey told Decrypt that he owned both Bitcoin and Ethereum. Could the Family Feud host be holding bags of Solana now, too?