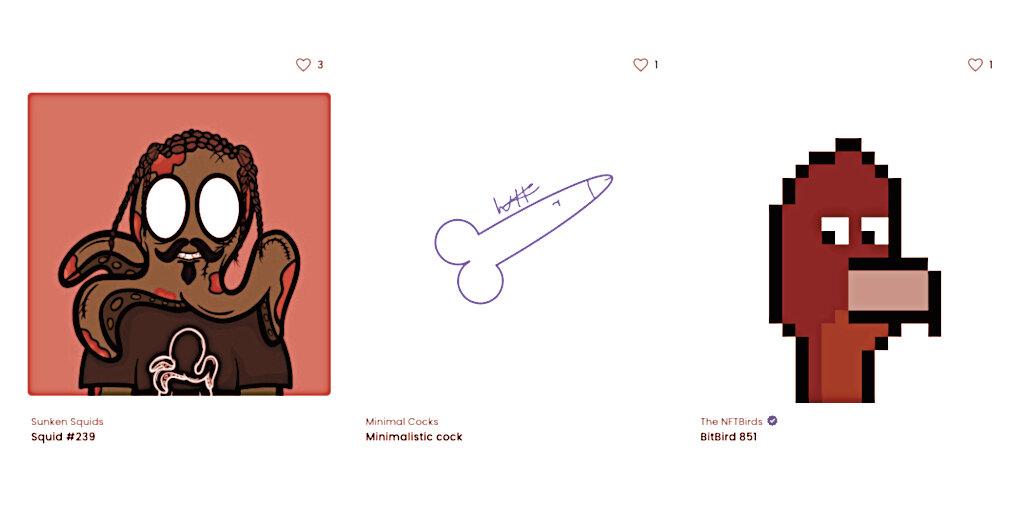 Budweiser made a splash in the crypto market late Tuesday, as the Anheuser Busch-owned beer brand purchased NFT collectibles, including the beer.eth Ethereum Name Service domain. But a glance at Budweiser’s Ethereum wallet reveals some other surprising NFTs, which are either hilarious or unsettling depending on your perspective.

For example, why is there a cartoonish penis from the PeePeeBoy NFT collection that’s dressed up like Harry Potter? Why also is there a crudely scribbled “Minimalistic cock” drawing from the Minimal Cocks NFT set? There’s also a CryptoDickbutt NFT, and others from varying collections that look like off-brand copycats of sets like Pudgy Penguins and Ether Rocks.

There’s no shame in collecting phallic NFTs, and if that is Budweiser’s prerogative, then more power to ‘em. Go nuts! There’s tens of thousands of them on the leading secondary marketplace, OpenSea. But that’s probably not what happened here.

Most likely, crypto enthusiasts have been sending their oddball NFTs to Budweiser’s wallet after the address was ultimately revealed as part of Budweiser’s Twitter maneuvers. An NFT acts like a deed of ownership to a digital item, including drawings of body parts and plenty more, so Budweiser now owns those images… even if it didn’t seek them out.

Crypto wallets are pseudonymous, relying on a string of letters and numbers to identify them rather than an easily-identifiable name or moniker. However, when a person or company reveals itself as the owner, that opens up the potential for abuse in the form of receiving unwanted assets, regardless of intent.

Whether you see it as antagonistic trolling or simply goofy fun, this certainly isn’t the first instance of it happening to high-profile subjects entering the crypto world. In fact, when Visa announced its purchase of a pricey CryptoPunk NFT on Monday, the wallet soon contained potentially controversial collectibles alongside. That wallet now has NFT images featuring penises, breasts, and piles of dog poop, along with a wide array of other collectibles—and the Ethereum Name Service (ENS) domain for feetpic.eth.

Those are two of the highest-profile examples to date, but there are others. For example, New York Times tech columnist Kevin Roose recently implored readers to “please stop sending me your tokens” after writing about Pudgy Penguins. And when billionaire investor Mark Cuban got into NFTs and crypto in a big way earlier this year, his wallet was inundated with incoming NFTs.

There’s another detail worth noting, too. While the beer.eth domain and “Life of the Party” NFT from the Tom Sachs Rocket Factory collection are listed as sales on OpenSea, the other NFTs were transferred. In other words, they were sent to Budweiser’s wallet, potentially without the brand’s advance knowledge. All of those non-sale transfers happened after Budweiser changed its Twitter profile picture to the rocket NFT and tweeted about it last night.

NFT folks: please stop sending me your tokens! I'm not going to write about them and I have to burn them or send them back, which costs gas and is generally annoying.

What can you do if you receive an NFT in your wallet that you don’t want to keep? As Roose tweeted, “I have to burn them or send them back, which costs gas and is generally annoying.” Those are the primary options: you can “burn” or destroy the NFT for good, or send it to another Ethereum address, whether it’s that of the original sender or elsewhere. In either case, you have to spend some ETH to pay the gas fee for a transaction.

In fact, when Mark Cuban unexpectedly received a vulgar ENS address NFT, he had to burn the asset to remove the connection to his wallet address. Cuban has apparently taken the hassles in stride, however, telling Decrypt in March: “Yeah, it’s not as private as people think. And that’s the whole point of the blockchain, right? That it’s 100% public because it’s all verifiable.”

You can also hide certain NFT assets from being shown on your profile at OpenSea, the leading secondary marketplace and a popular way to view NFT collections—but they’ll still be in your wallet. Those digital dicks won’t disappear so easily.