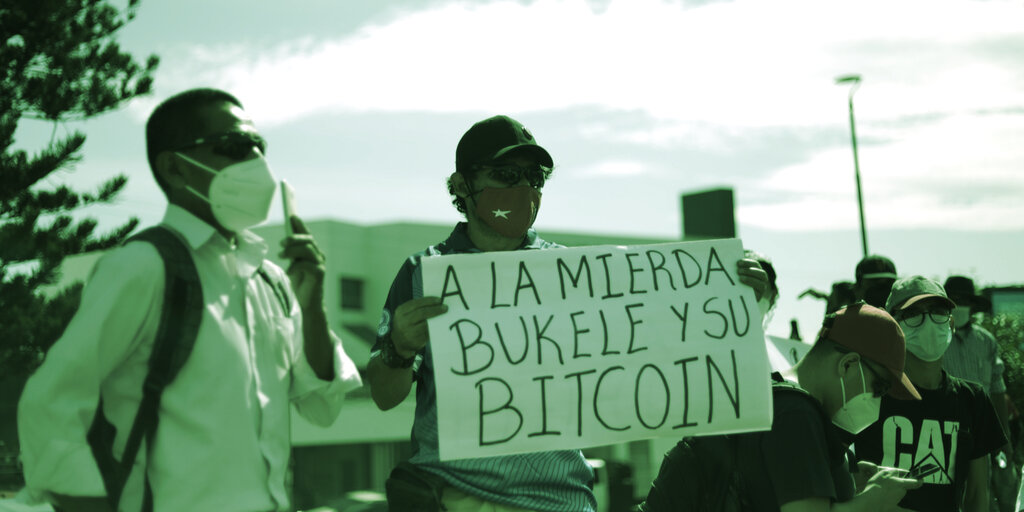 Bitcoin’s loudest advocates have celebrated the country’s total embrace of Bitcoin, claiming the cryptocurrency will usher in a new era of financial freedom for the country. President Nayib Bukele ceremoniously purchased 400 Bitcoin, worth a little more than $20 million, for El Salvador to usher in the new law.

But not everybody is celebrating—or praising President Bukele.

Salvadorans living there say the new Bitcoin Law has already brought out the worst in the President’s already well-documented authoritarian tendencies.

“[The government] has harassed big business and small business alike. They’ve sent government agents to inspect businesses to ensure they are following labor regulations just because C-level executives have said negative things about the [Bitcoin] law,” one local business person told Decrypt on the condition of anonymity.

This is the story about El Salvador that Bitcoin maximalists don’t want you to read.

Last month, President Bukele said Bitcoin would not be forced on anyone.

“If someone wants to continue loading cash, not receive entry bonus, not win over customers who have Bitcoin, not grow your business and pay commission on remittances, you can keep doing it,” he tweeted.

But that’s not quite true. A short clause in the legislation itself shows that acceptance of Bitcoin is—and will be—compulsory.

“Every economic agent must accept Bitcoin as payment when offered to him by whoever acquires a good or service,” reads Article 7 of the Bitcoin Law.

“It crushes my soul to see Bitcoin maximalists around the world cheering this when if they actually sat down and read the law and regulations, it is completely opposite to everything they preach,” the local businessperson told Decrypt.

President Bukele’s legal counsel is doubling down on their position too.

In an interview on Frente a Frente, a Salvadoran news program, Javier Argueta said that business people who do not use the Chivo wallet—which will facilitate Bitcoin transactions in El Salvador—will be subject to sanctions.

Bitcoin by any means necessary

The forced adoption of the world’s leading cryptocurrency has also sparked hefty criticism among citizens. Bukele’s government has been swift to silence these critics too.

Six days ago, police arrested Mario Gomez, a vocal critic of Bukele’s Bitcoin Law. Law enforcement alleged the activist was being investigated over allegations of financial fraud, but the police failed to produce an arrest warrant at the time.

“The police doesn’t have to take anyone to court. They just scare one of the vocal dissidents with kidnapping him a couple of hours or a couple of days,” another local businessperson told Decrypt on the condition of anonymity.

“The police kidnapped Mario. He was ‘arrested’ without a judicial order,” they added.

Gomez’s legal counsel, Otto Flores, reportedly said it was “not clear why Mario was handcuffed…and was taken away by the police without knowing what he is being accused of,” adding that the arrest was “arbitrary.”

Though the crypto community has embraced the central American country, Bukele doesn’t quite fit the mold of the freedom-seeking leader Bitcoin enthusiasts have championed.

Last week, for example, El Salvador’s courts ruled that Bukele can serve two consecutive terms, a decision that was slammed as unconstitutional by the United States and other foreign powers.

Josè Miguel Vivanco, a vocal critic of Bukele’s government, tweeted yesterday that Bukele is dismantling the institutions of democracy faster than Hugo Cháves did in Venezuela.

“What’s next? If we are guided by the history of Venezuela: censorship of the press, restrictions on civil society, total impunity for human rights violations, arrests of opponents, electoral fraud,” Vivanco said.

Unfortunately, El Salvador’s slide to authoritarianism is not new, and some of what Vivanco has described has already happened under Bukele’s watch.

“The path Bukele is marking with his words and deeds passes through all the stages used by populist leaders on their way to the establishment of totalitarian regimes,” Steve Hanke, professor at Johns Hopkins University, told Decrypt.

The Economist’s Democracy Index of 2020 defined El Salvador as a “hybrid regime,” meaning the government is only one category above an outright authoritarian regime and well below a full democracy.

The report is littered with poor scores on a variety of political culture assessments, behind which are a highlight reel of Bukele’s heavy-handed political decisions.

Amid the COVID-19 pandemic, Bukele has repeatedly shown a disdain for human rights—detaining people arbitrarily in containment centers in conditions that risked their health.

Police were also caught brutally beating an 80-year-old man for allegedly not complying with COVID-19 requirements. Bukele had previously explicitly instructed police to “be tougher with people violating the quarantine,” and that he would not mind if law enforcement “bent someone’s wrist” during an arrest.

El Salvador’s Bitcoin experiment has been public knowledge for months now, but a lot remains to be seen.

An investigation by Decrypt showed that Strike—a central partner to El Salvador’s Bitcoin embrace—did not have the necessary licenses to operate legally. To date, Strike has not responded to Decrypt’s request for comment.

In May, the United States named five of Bukele’s closest aides—including his Chief of Cabinet Carolina Recinos and Regelio Rivas, former Minister for Justice and Public Security—as corrupt.

As Hanke told Decrypt, Bukele may have gained “substantial notoriety” through his Bitcoin plans, but this “is just one step in Bukele’s much broader scheme, namely, his rush to obtain absolute power.”