A fork is a separation or branch of a chain with data or software. With crypto it is always about the blockchain that splits. At the moment of the fork, the running chain splits from the protocol and goes in a new parallel direction. This way a new blockchain is created with a new cryptocoin or -token. In general, the history of transactions on both blockchains is preserved.

The most controversial fork is the one from bitcoin to bitcoin cash. Forks can be beneficial, but often have a nasty side effect. It was favorable when the blockchain was forked from bitcoin to bitcoin cash. At the time, all bitcoin owners received an amount of bitcoin cash pro rata. Under the motto ‘the rich getting richer’. In addition, a fork creates a mutation that affects the authenticity of the original blockchain. Which one is the original or the best? Anyway, the consequences of a fork always keep the community busy.

A soft-fork has the least impact on the protocol and is the most common. This is because it is backwards compatible. With a soft-fork, the rules, such as block height (MB) are tightened and therefore less is allowed than in the previous chain. For new nodes the new rule applies, but the old nodes can choose not to upgrade. The new rules fit within the old ones. 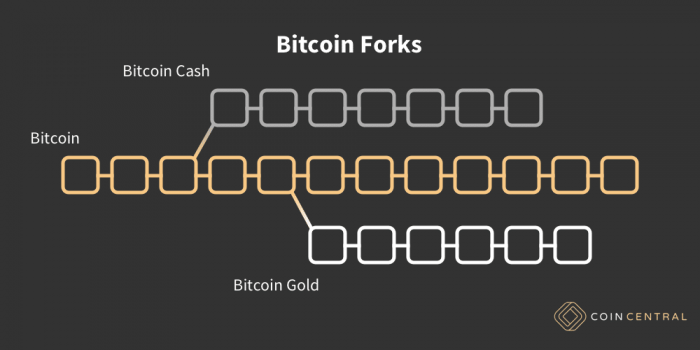 However, if changes are made that are not backwards compatible, it is called a hard fork. The new appointments do not fit according to the original protocol. Nodes that do not update will remain on the original blockchain, if it remains.

A soft-fork is, due to compatibility with older versions, less radical and less dangerous than a hard-fork. Adjustments to the protocol, via a soft fork, is therefore often preferred.

Wondering which crypto is a fork? Visit the website of mapofcoins.com, where all forks are displayed.